The Whiting-Turner Contracting Company worked closely with NessCampbell Crane & Rigging for a year (2016-2017) on a large, intense, confidential Mission Critical construction project in Oregon. On our project, both their Project Management and field execution performance was exemplary. While they provided crane services for many different portions of the project, their largest scope was the rigging and setting of a large magnitude of mechanical and electrical equipment. To put it in perspective, critical lifts and complex rigging were executed continuously over a period of 6 months. I was the Project Manager responsible for the Mechanical and Electrical scope for the General Contractor, and I was consistently impressed by NessCampbell’s attention to safety, detailed rigging plans, and the ability/willingness to be flexible with all that comes with large-scale construction projects. NessCampbell’s attention to detail, positive attitude, and strong work ethic were integral to our team completing the job safely, and it was because those qualities were consistent through their tenure on the job that they were such an important asset to the project team as a whole. I jumped at the opportunity to write this letter because I have had nothing but positive experiences working with NessCampbell, and I hope to work with them again in the future. 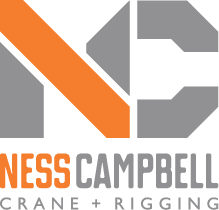